Recently I noticed, that my Vim configuration is getting a bit outdated. The configuration of one of my mate had a fancy status line, showed syntax errors when saving a buffer and he used vundle to manage his Vim plug-ins. I used to manage my Vim plug-ins with yaourt, a package manager for user packages in ArchLinux.

First one needs to get the vundle plug-in via git:

Then one needs to setup Vim to use it:

From there adding additional plug-ins is as easy as adding a Plugin ... line right after the vundle plug-in.

So adding airline for a fancy status line, syntastic as a syntax checker and git support with fugitive is as easy as this:

Out of the box airline does show the status bar only if at least one split is active:

Also the default symbols used in the statusline aren't that fancy. Adding set laststatus=2 enables the statusline by default and let g:airline_powerline_fonts = 1 lets one use the powerline fonts

Configuring my terminal emulator of choice, urxvt, turned out to be a bit of a hassle.

Installing the fonts was easy:

Then in ~/.Xresources configure urxvt to use a powerline font:

Then reloading the configuration

The problem was that urxvt didn't like that at all and displayed the fonts with the spacing all messed up. After an hour of googling and trying out different stuff, it turned out I just needed to kill and restart the urxvtd daemon!

After that it worked like a charm and the special symbols did show up nicely: 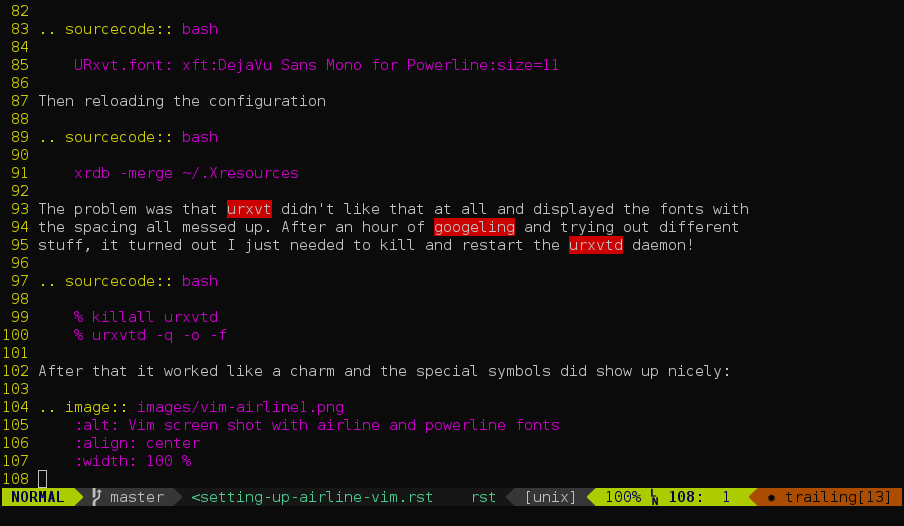