When arriving in Budapest in the afternoon, I noticed that the Hackerspace Budapest was still closed, so I used the time to organize my flight to Kiev for RustFest and book a hotel close to the airport. As it turned out this was a bit unnecessary, but more about that later.

Since I couldn't figure out where the Hackerspace Budapest had its IRC channel (turns out it is #hspbp on IRCnet. One can connect to it using open.ircnet.net), I just waited till the state on their website turned to "open".

Finding their hackerspace was a lot harder then I thought! They give you the street name and number on the hackerspace wiki, but when I arrived at this street I found a three floor building with various flats. I looked around there and asked a plumber which was working there, if he knew about a hackerspace. He couldn't help me, but confirmed that I'm in the correct building according to the street name and number. So I continued to look around, which led to some neighbours getting suspicious about me. I had a rather strange conversation with one of them who apparently couldn't speak any English. After trying to help me for a while he showed me out. When I was just walking away I noticed a small door about a meter away from the entry to the building: 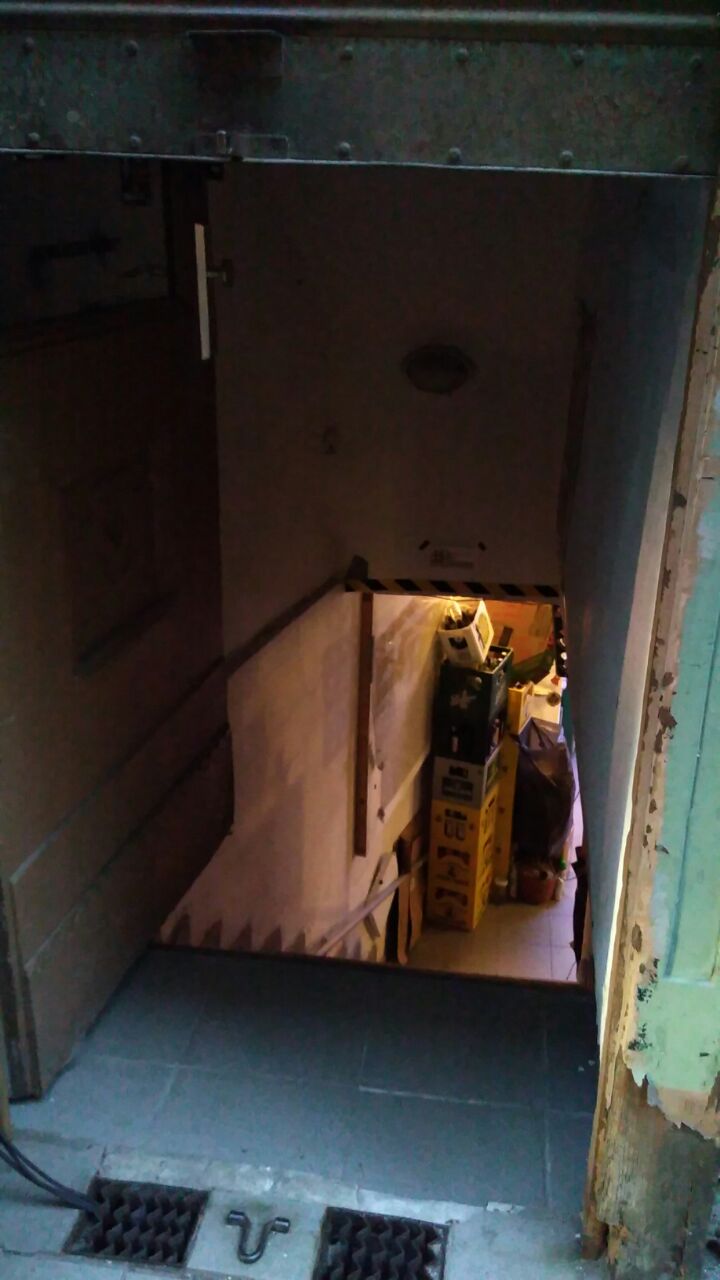 Entry to the Hackerspace Budapest

Seeing the Club Mate crates, reassured me that this must be the Hackerspace I was looking for! So I entered and told them my story about searching for their hackerspace. When we finished laughing, they showed me around in their space.

There is the classical main working room: 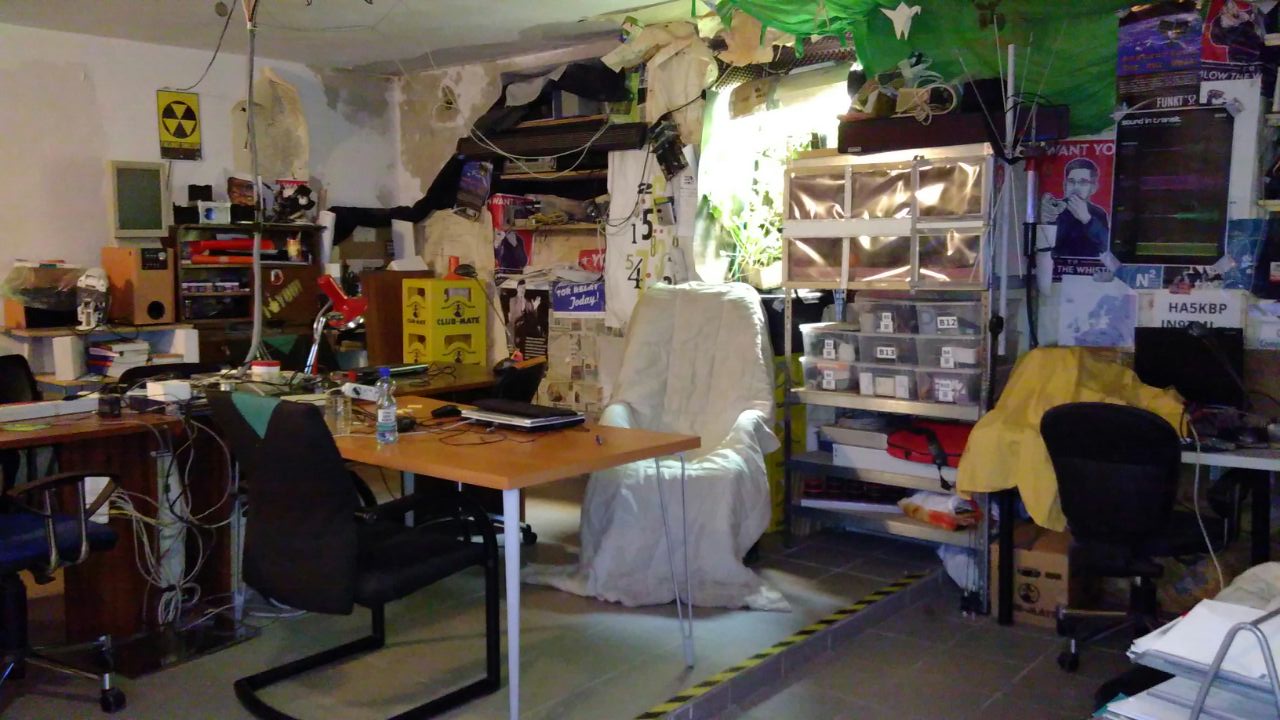 In the main working room there is a small biotope / green wall / biological experiment setup. 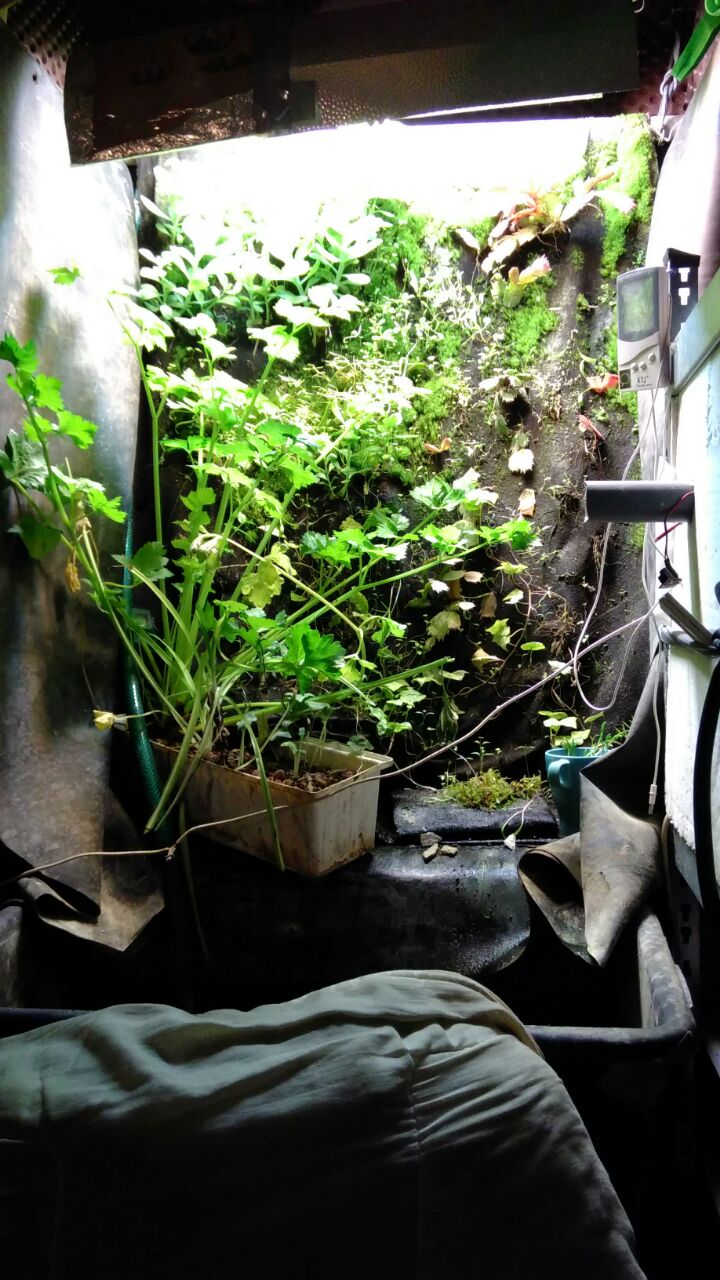 Inside there lives an axolotl (named Haxolotl) which, so they told me, forms a stable ecosystem together with the plants. Apparently the excretion from the axolotl produce all the minerals the plants need to grow. So they simply pump the water where the axolotl resides to the top and let it flow down. The only thing they need to do is to feed the axolotl with worms every day. 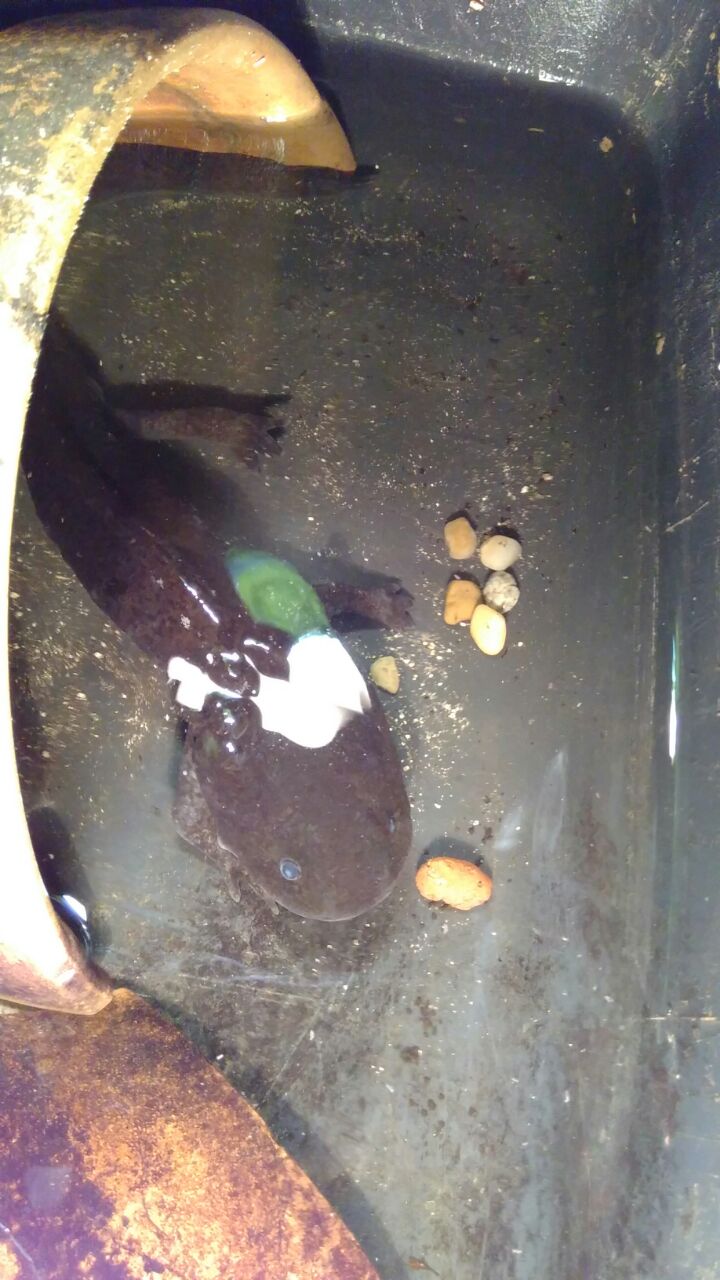 They also have built a mechanism to avoid over feeding the axolotl: Whenever one feeds it, you also press a button which will then change its color from green to red. This will remain like that until the next feeding time were it will turn green again. I found this whole thing quite amazing!

Next there is their 3D-printer and electronics lab: 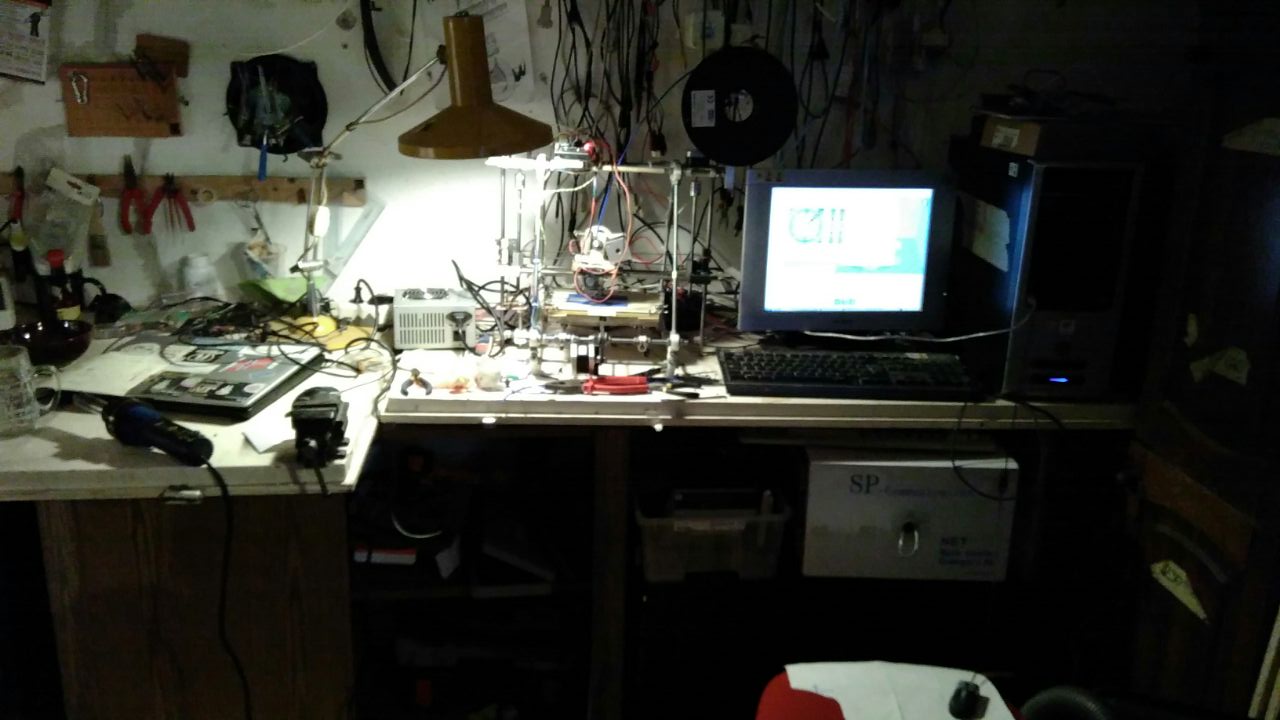 Being a rather small hackerspace, comparable to coredump, they didn't have a laser cutter, since they can't afford it yet.

The space also features a kitchen and restrooms: 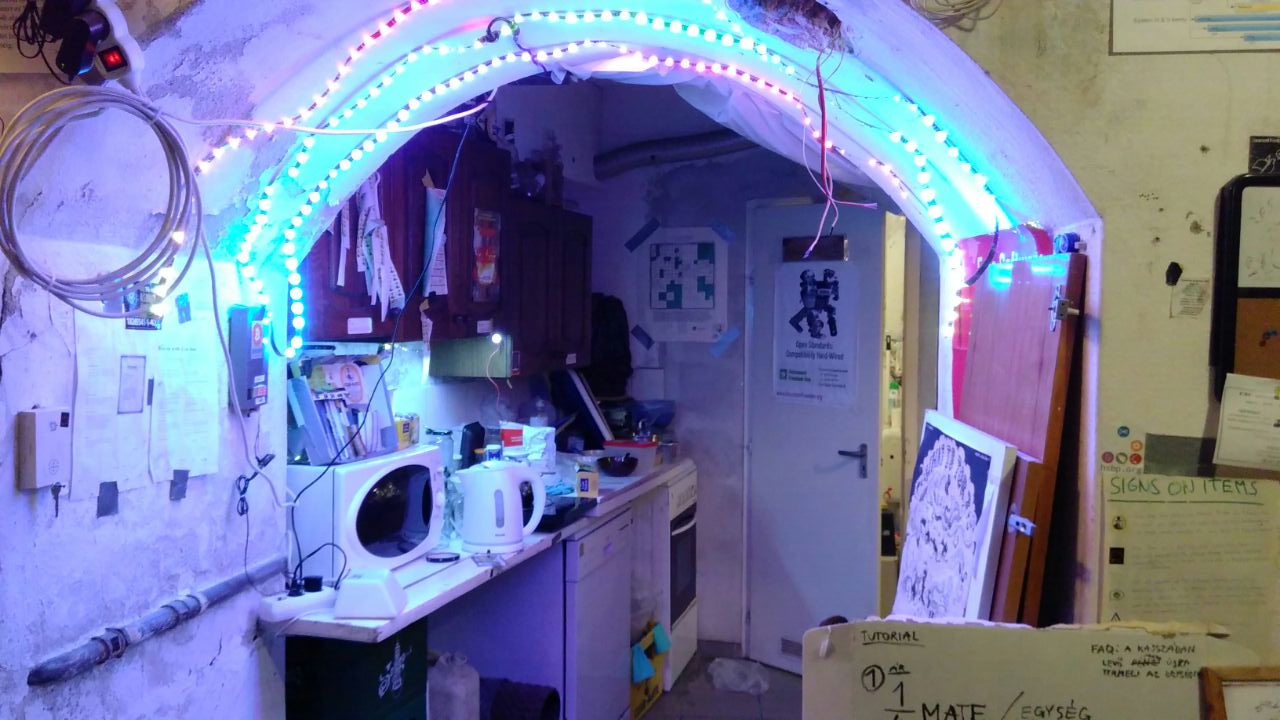 Kitchen and door to the restrooms

The members just put stuff there either if they have no use for it or as a gift for the other members, mostly in the form of food and drinks. One can loot the area by just taking the things for free.

They also told to me about the Camp++ they are organizing every year, which sounded a bit like a smaller version of the Chaos Communication Camp.

The next day I spent mostly taking a look at Budapest, which is quite an amazing city.

Since I wanted to travel only with cabin baggage to Kiev, I agreed with the space, that I can store my suitcase in their room and pick it up when I return from Kiev. So I arrived in the evening to store my suitcase. Since I and the only hacker present didn't have any dinner yet, we decided to cook. 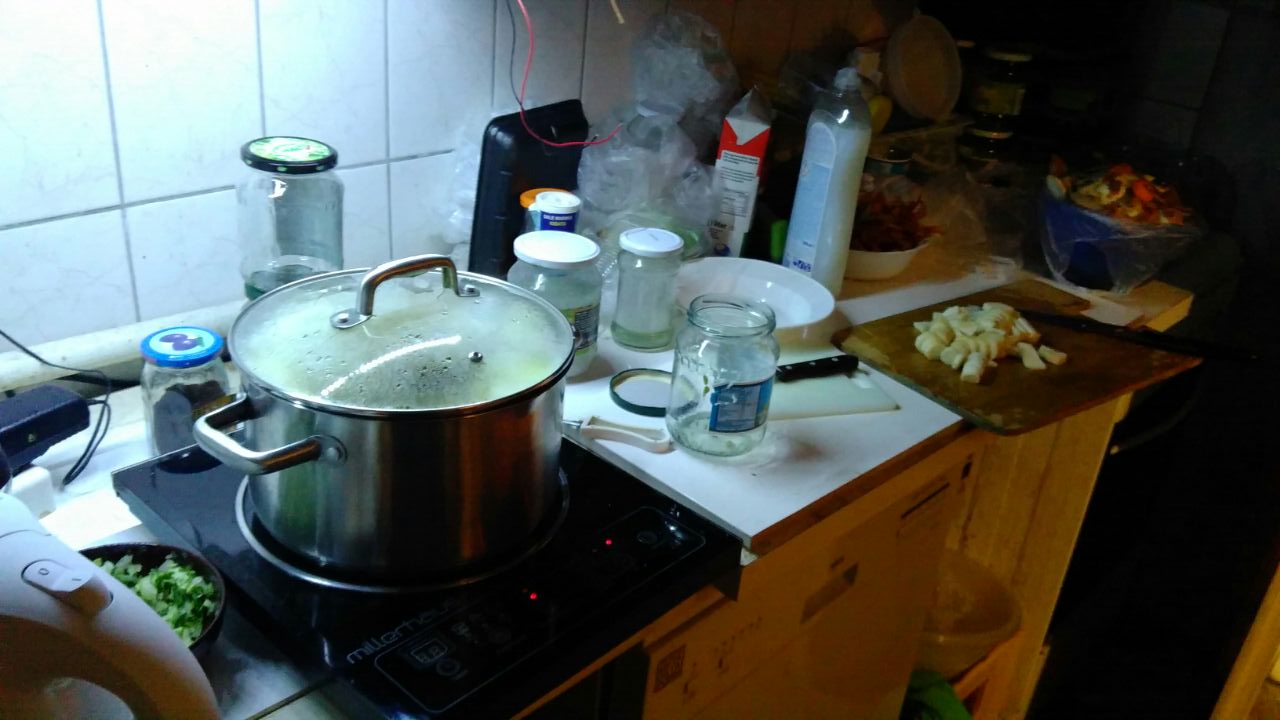 Cooking in the hackerspace

So after eating together and talking for a bit, I decided to go to the Hotel early, since I had the flight to Kiev in the morning.

Sadly I forgot, that I still had my passport in my suitcase in the hackerspace which I noticed when I was already at the airport. I tried to travel to Kiev with just my ID card, but when boarding they told me this isn't possible.

So while writing this post I'm on a 18 hour train ride to Kiev which is still faster than taking the next flight which would be on Saturday afternoon.

I really enjoyed my visit in the Hackerspace Budapest and will visit them shortly again when I return from Kiev on Tuesday.