After an entertaining BlaBlaCar ride with a mixed group of 7 Croatians who did enjoy a weekend of river rafting, I arrived in Zagreb at around 22:00. I agreed with Vedran from hacklab01 to meet in front of the building.

During my email conversations with Vedran I kinda realized, that I'm not just visiting a hackerspace, but an alternative culture centre called Medika [1] which is run by AKC Attack. So upon arrival I was quite enchanted by the charm of the place. 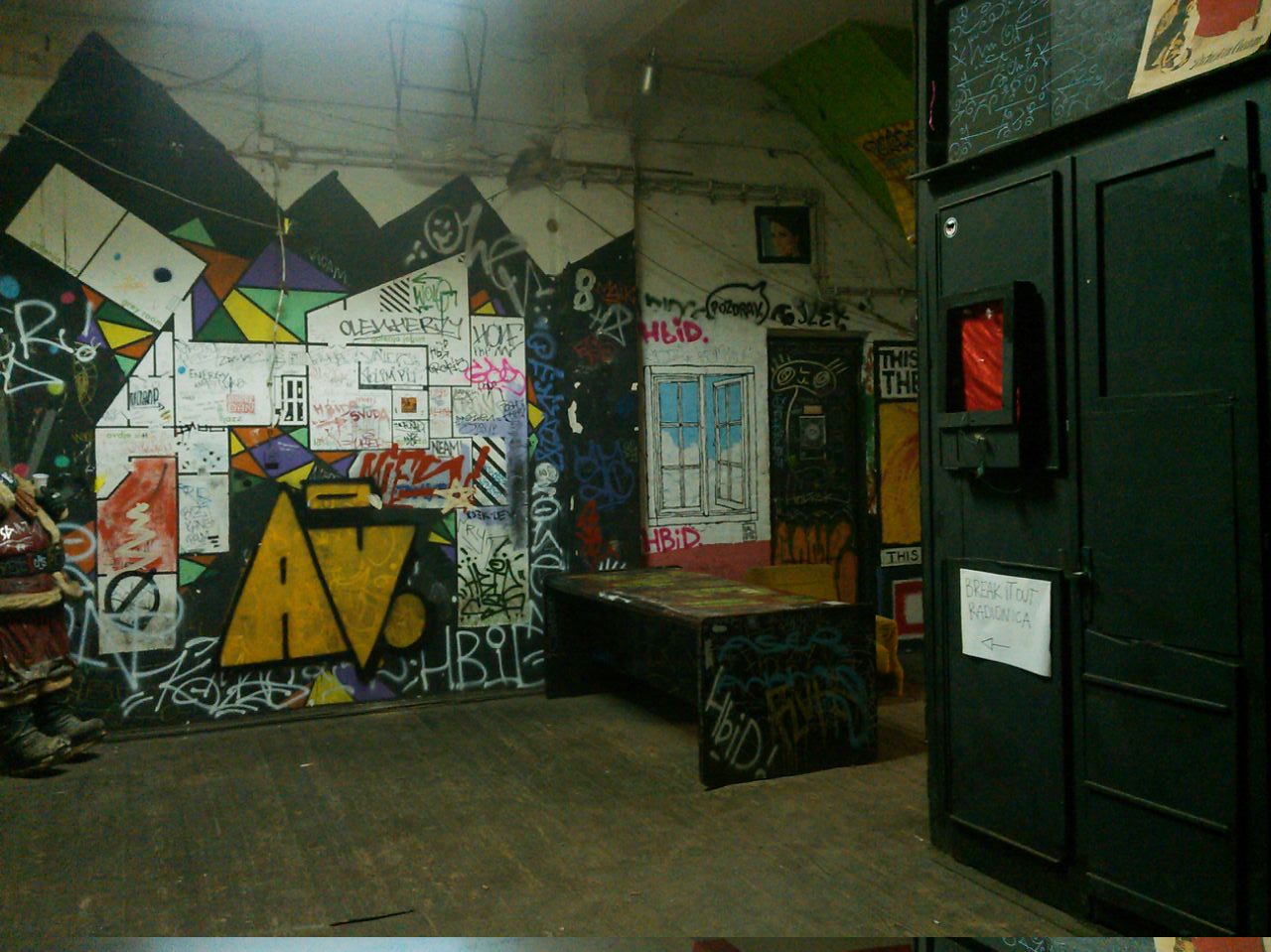 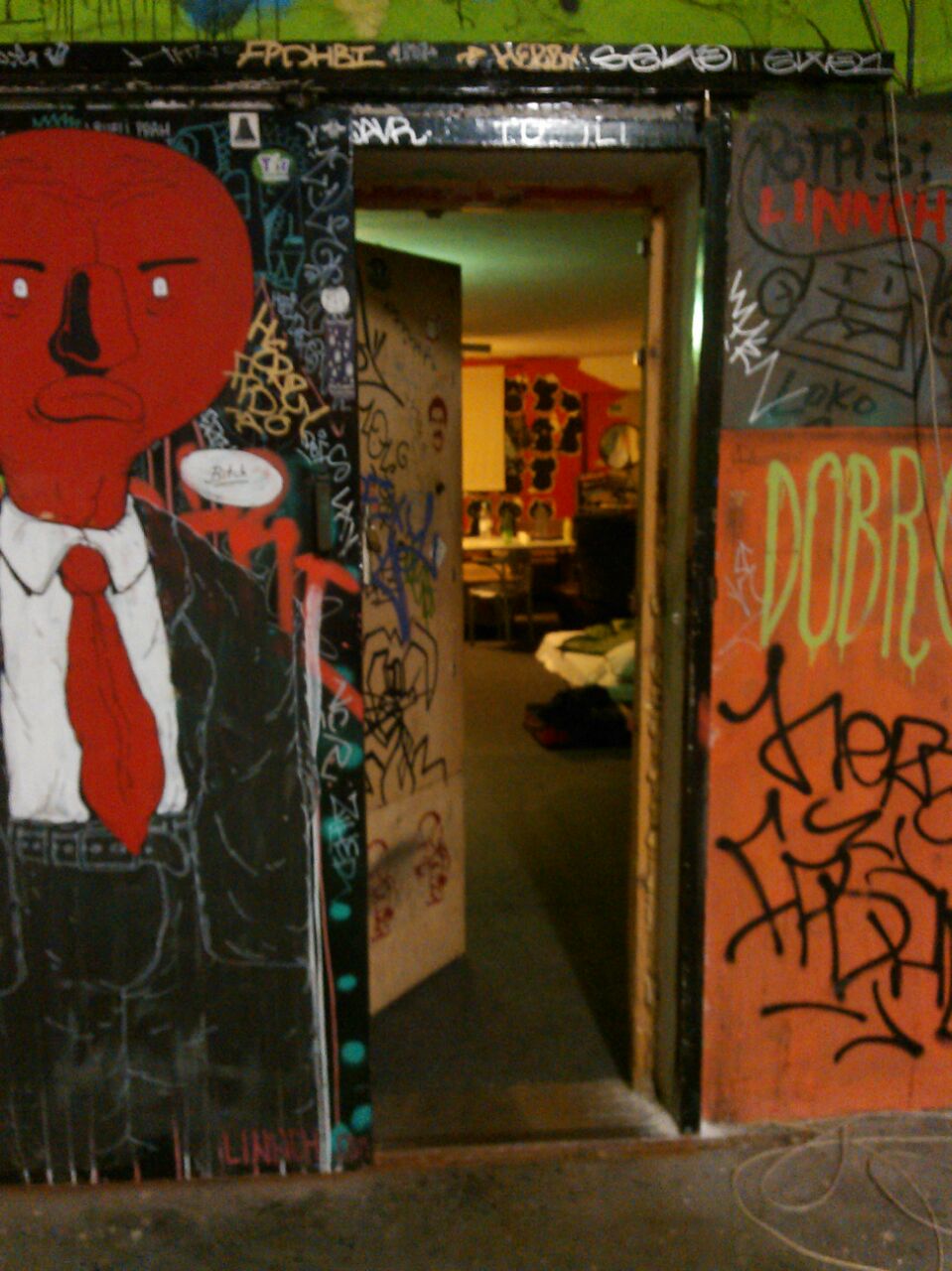 Since Vedran was in the middle of a meeting, I just sat down and started to talk to a few members. One girl brought some cookies made with cricket flour. Since we did a similar things with a few of the coredump members some months ago [2], this immediately sparked an interesting discussion about meat production, insect growing and that strangely no company shares how to grow insects by yourself. Also quite a few members were interested in Rust, so we decided that I will give a short introduction to Rust on Tuesday.

When Vedran had finished his meeting he gave me a quick show around. The hackerspace itself consists of a single room, containing an electronics workspace, some tables for laptop work, couches and a bunch of other stuff. 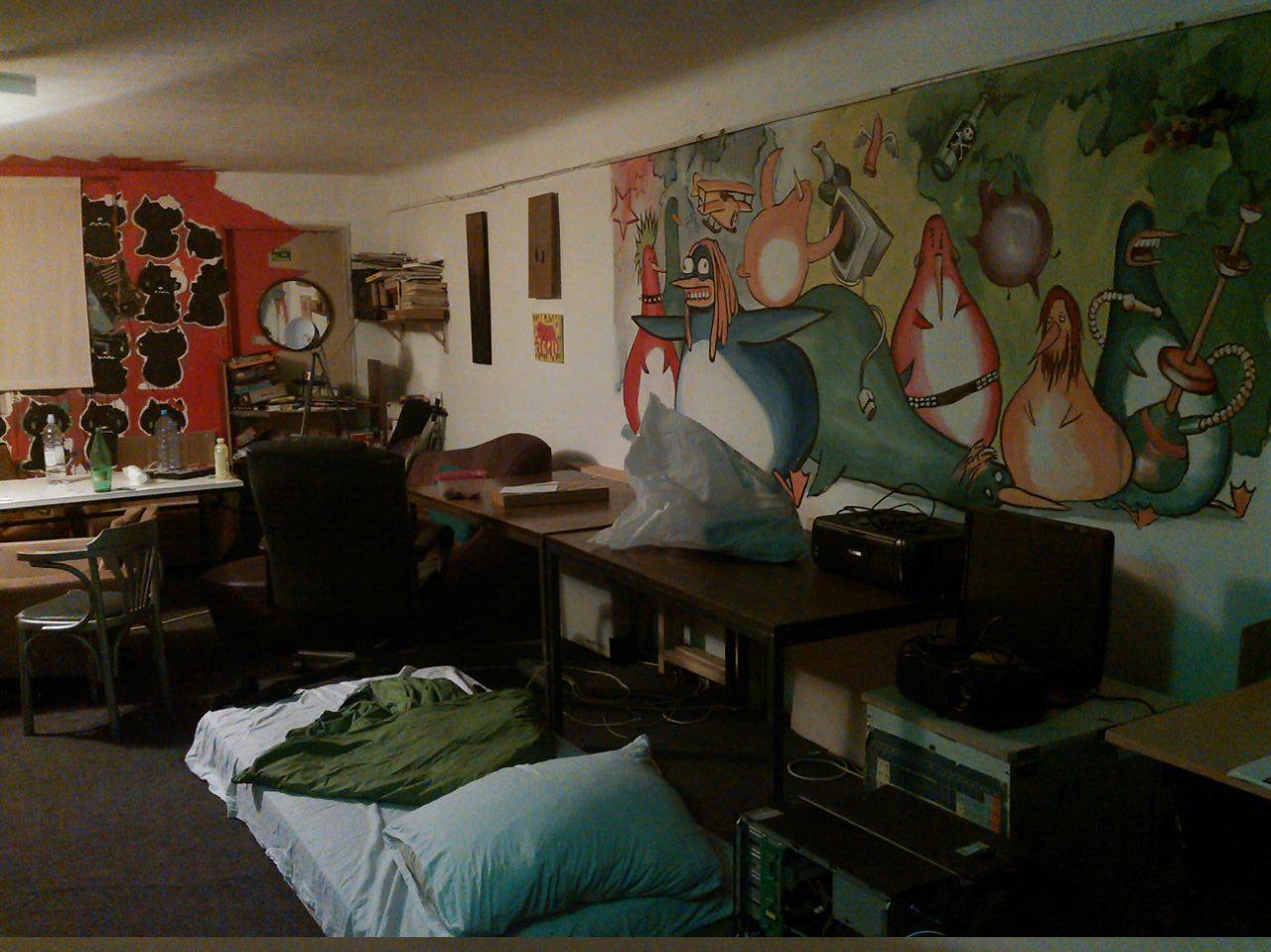 But since there are various other NGOs and artist in the same complex, there was plenty of stuff to see! [3] 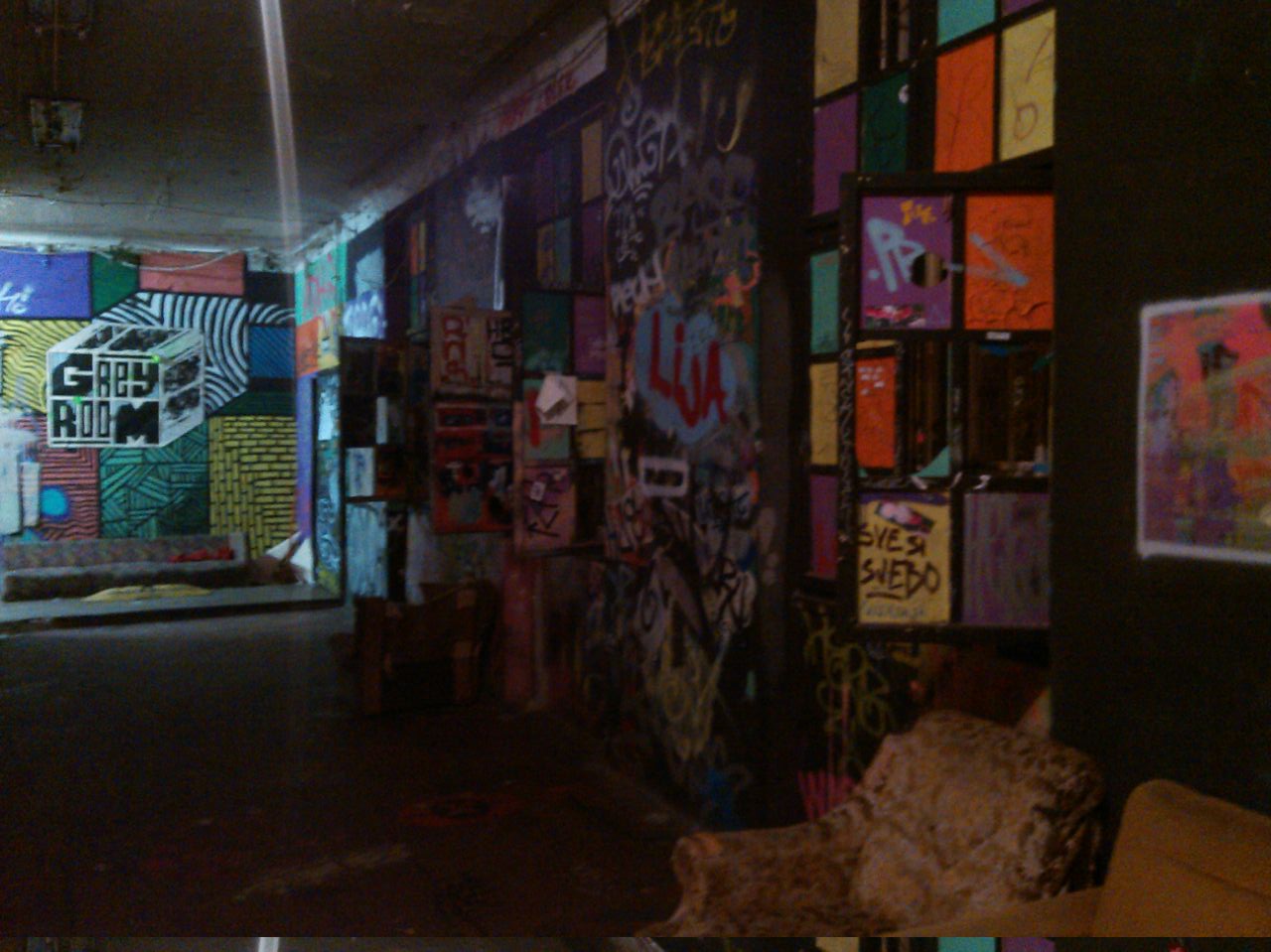 The rooms for residents of Medika, including showers and toilets, are separated from the rest of the building. 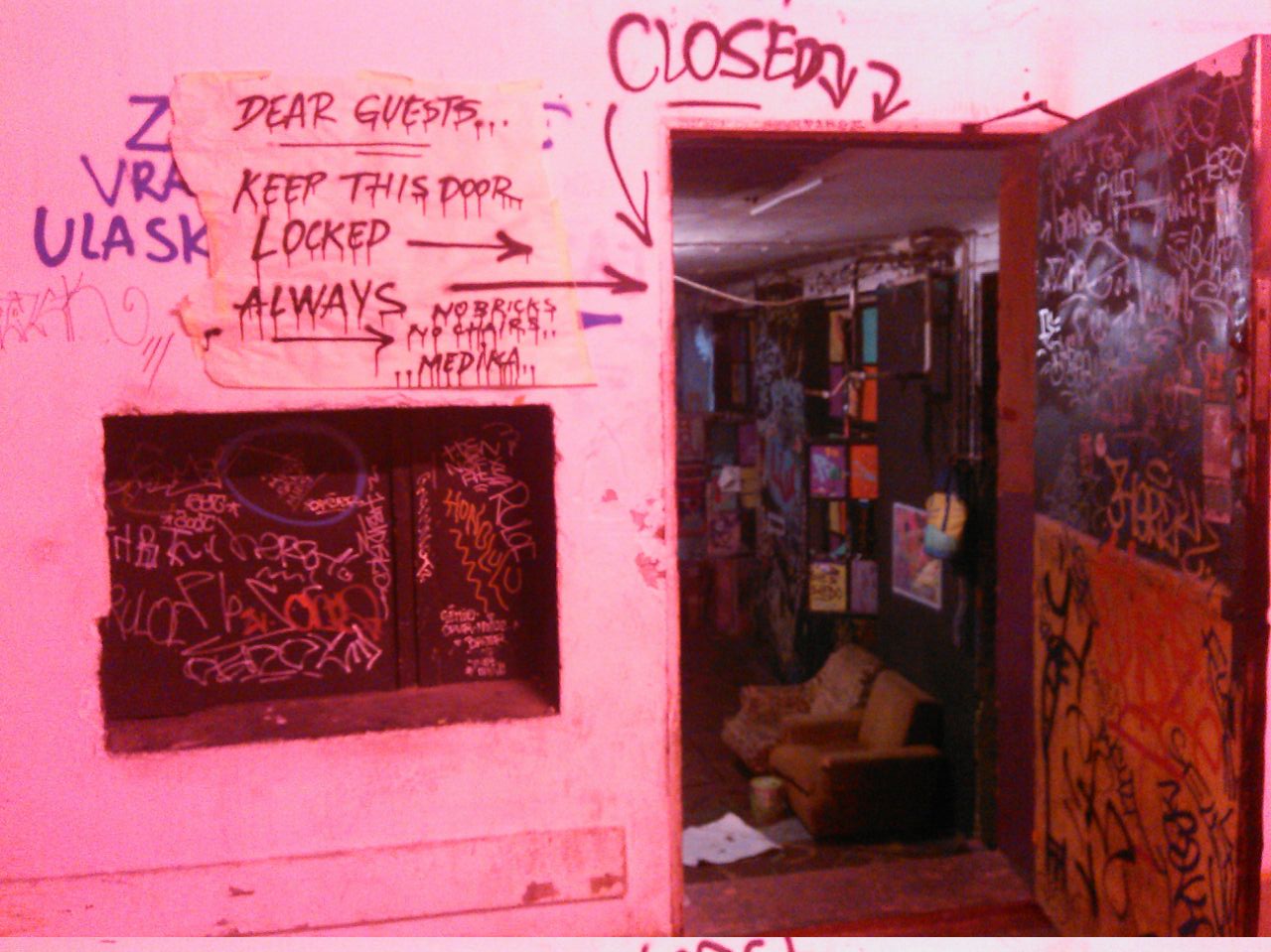 Door to the living part of Medika

Sadly I didn't take pictures of every room. In the "headquarter" of the building I had the pleasure to meet Dina. She took up the challenge to manage this quite chaotic space two weeks ago. The government announced them a week ago, that they will need to move out [4]. Due to this the week was rather stressful for her and most of the people living or working in Medika. On the bright side this also forced them to closely work together, which strengthened their the Medika community as a whole. 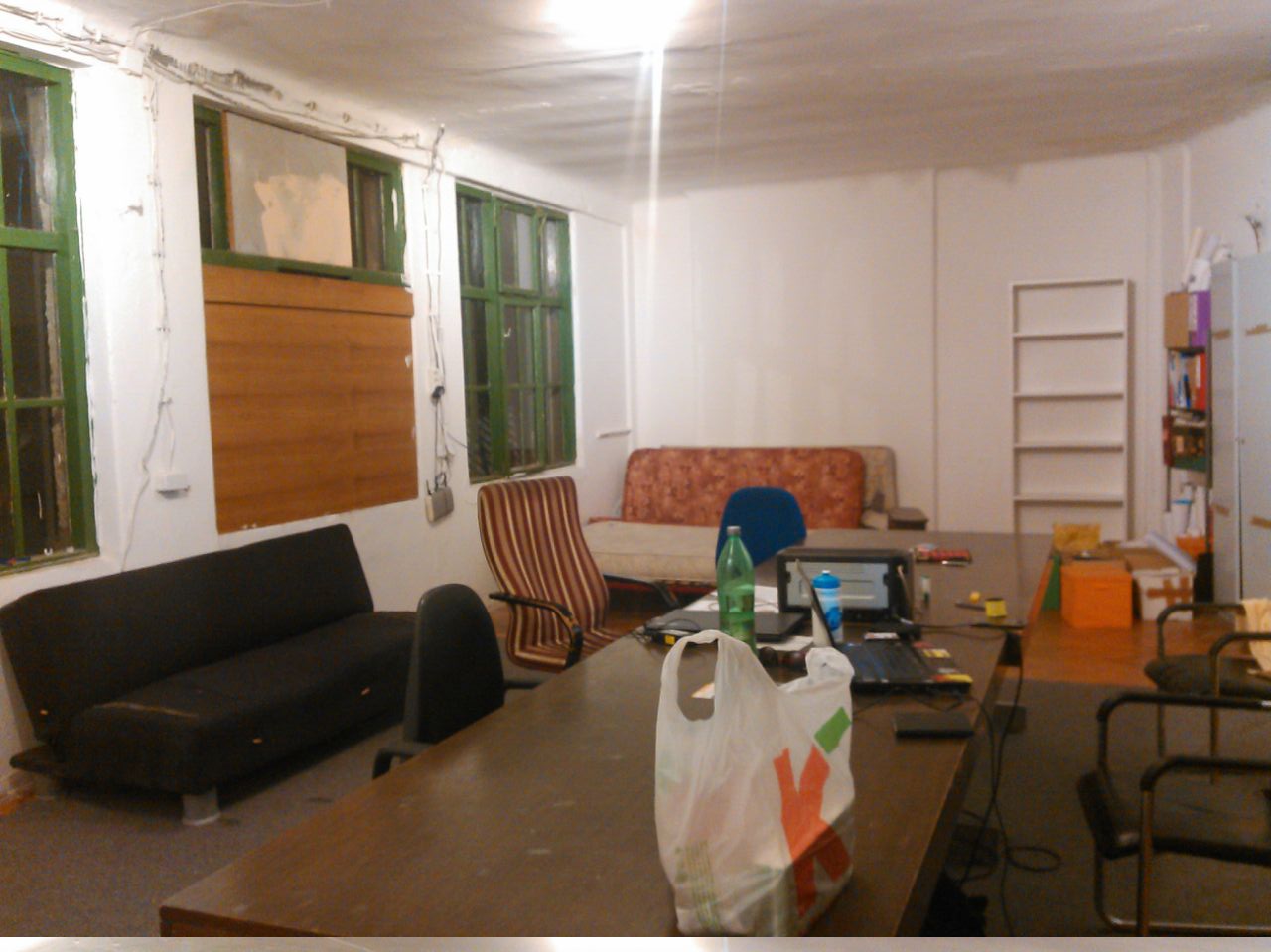 They told me that similar stuff happened before and that the situation as a whole is kind of strange. On one hand the government supports some of the projects running in Medika financially, on the other hand there is a plan to build some kind of congress center in this area.

I agreed with Vedran to spend my night in the hacklab, so he handed me the keys [5] and showed me where toilet, shower are located. They even would have provided me with a sleeping bag, shampoo and everything else, since I forgot to tell them that I have all that stuff with me! I found this level of hospitality quite amazing and welcoming!

The next day Vedran showed my around the old town of the city in the afternoon. 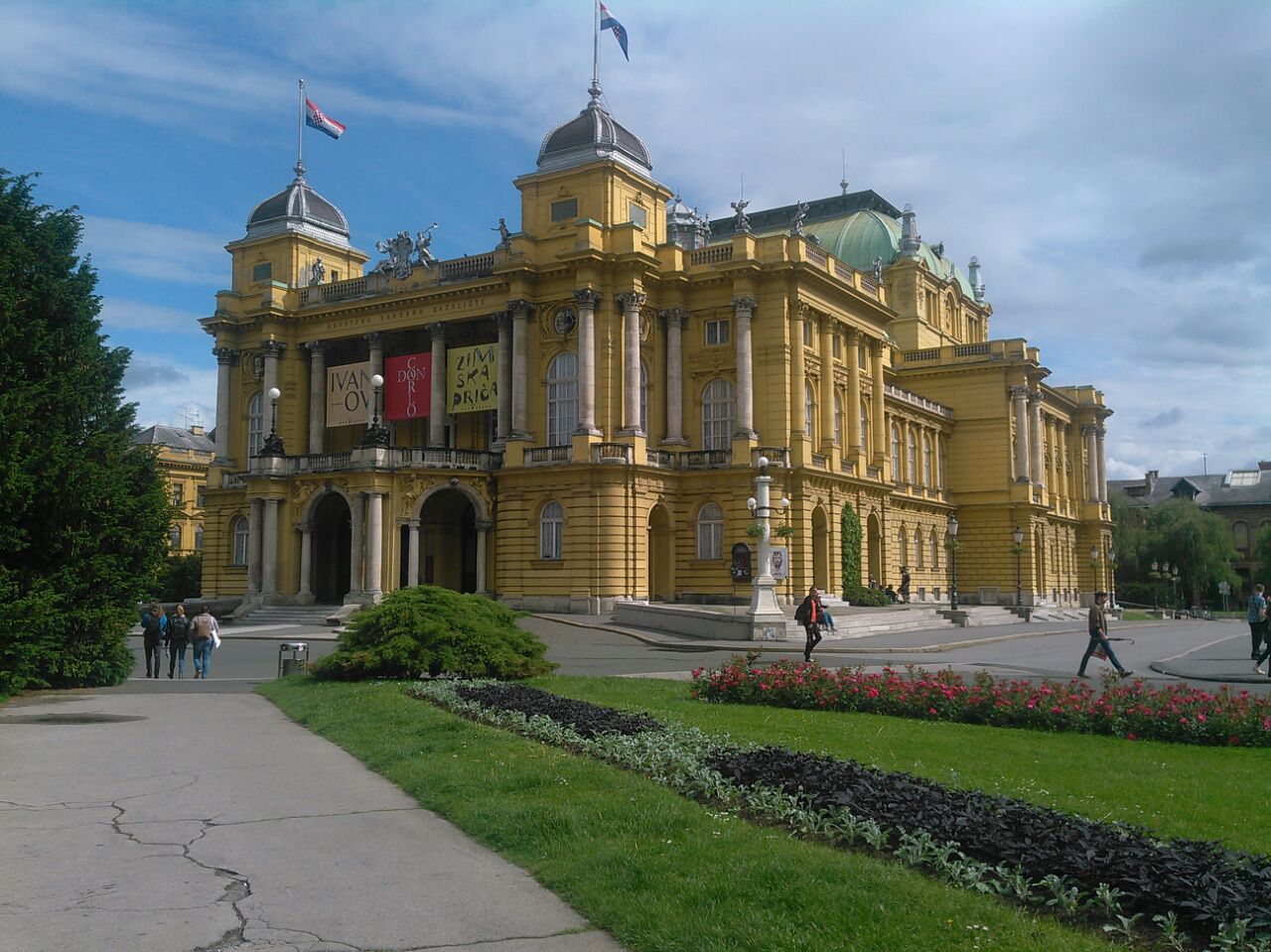 When we got a coffee, we started to talk about the problems they have with the government. He told me it is probably related to the elections which will be soon and the major just needs to get some attention. He also told me that the major is charged with corruption. I was kind of shocked, that a major can be charged because of corruption, but doesn't need to resign because of that. According to an UN report corruption and bribery is very common in Croatia, so maybe the population just got used to it. 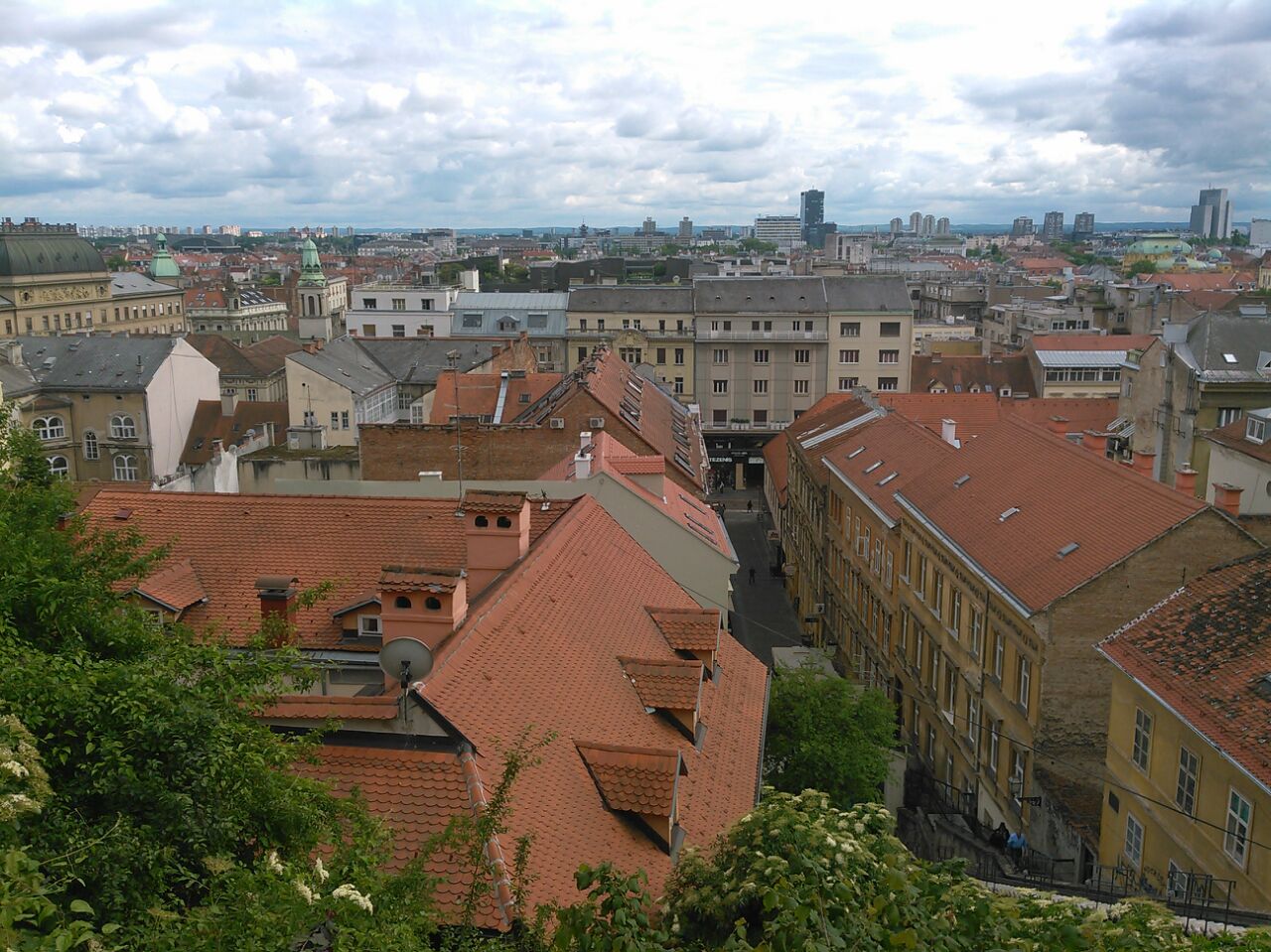 View over the old town

The rest of the afternoon I spent in the hackerspace itself, writing my blog posts, preparing for the Rust workshop and talking to the members which were present. Later in the evening I went to get some beers with Vedran in a nice bar close to Medika. I met quite an interesting guy there, who explained me the history of Croatia, its cultural inheritance and how lots of it got destroyed during the time of the Austrian Hungarian empire and the Ottoman wars. We also talked about the difficult economic situation in Croatia including the recent collapse of Agrokor, Croatias biggest business empire, which has the potential to bring the whole country down.

Also, probably because of all the media attention, a girl on Facebook independently organized a party in Medika to show support for the place. So when I got up people where already preparing stuff for the party.

Since it was very nice weather I decided to take a look at the Botanics garden in Zagreb. 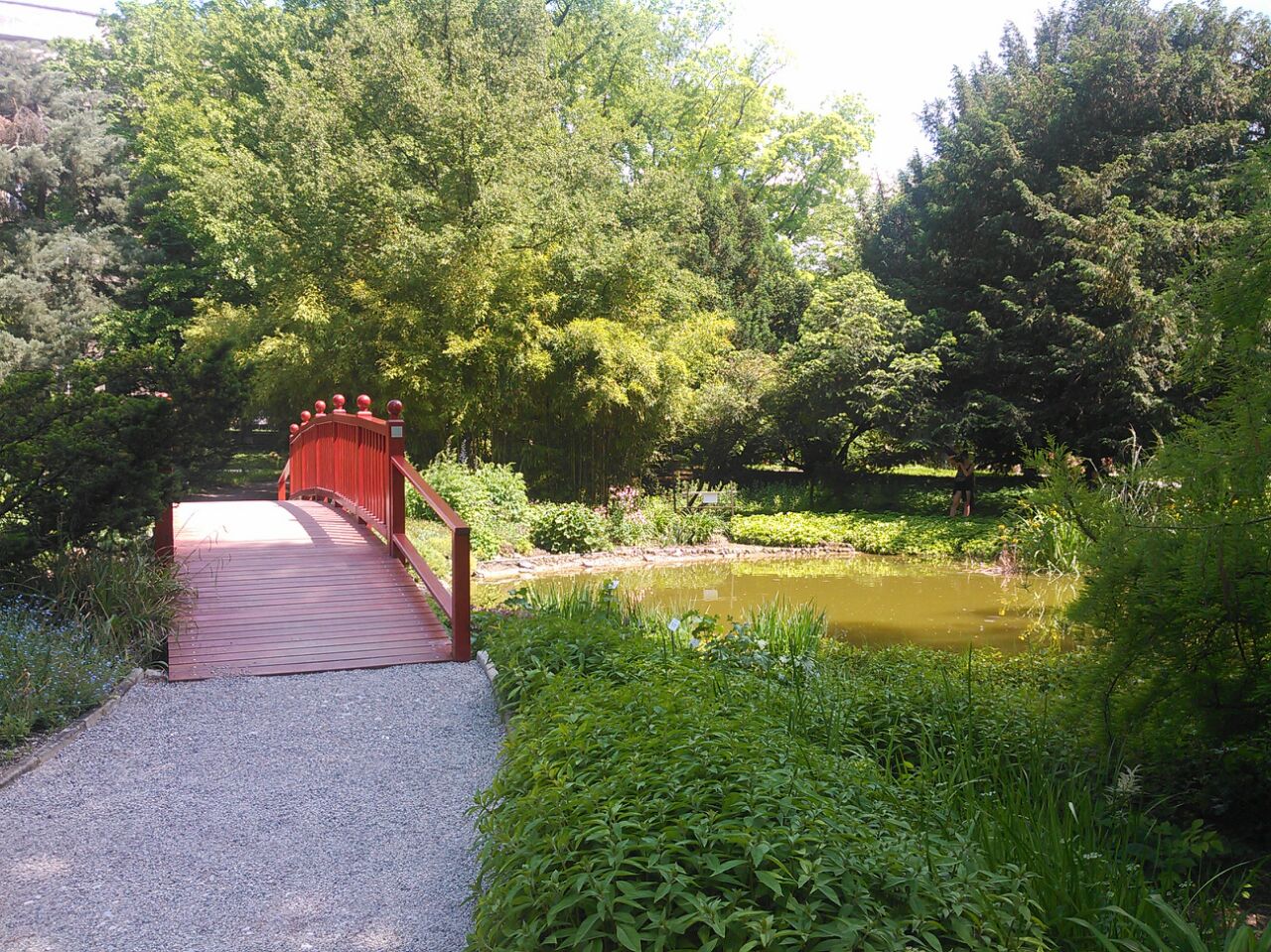 After that I wandered around the city and got some coffee (and somehow got member of a book club). This lead to me almost missing the introduction to Rust workshop I agreed to give in hacklab01! So I rushed back to the space and shortly after had an awesome time helping people getting started with Rust. 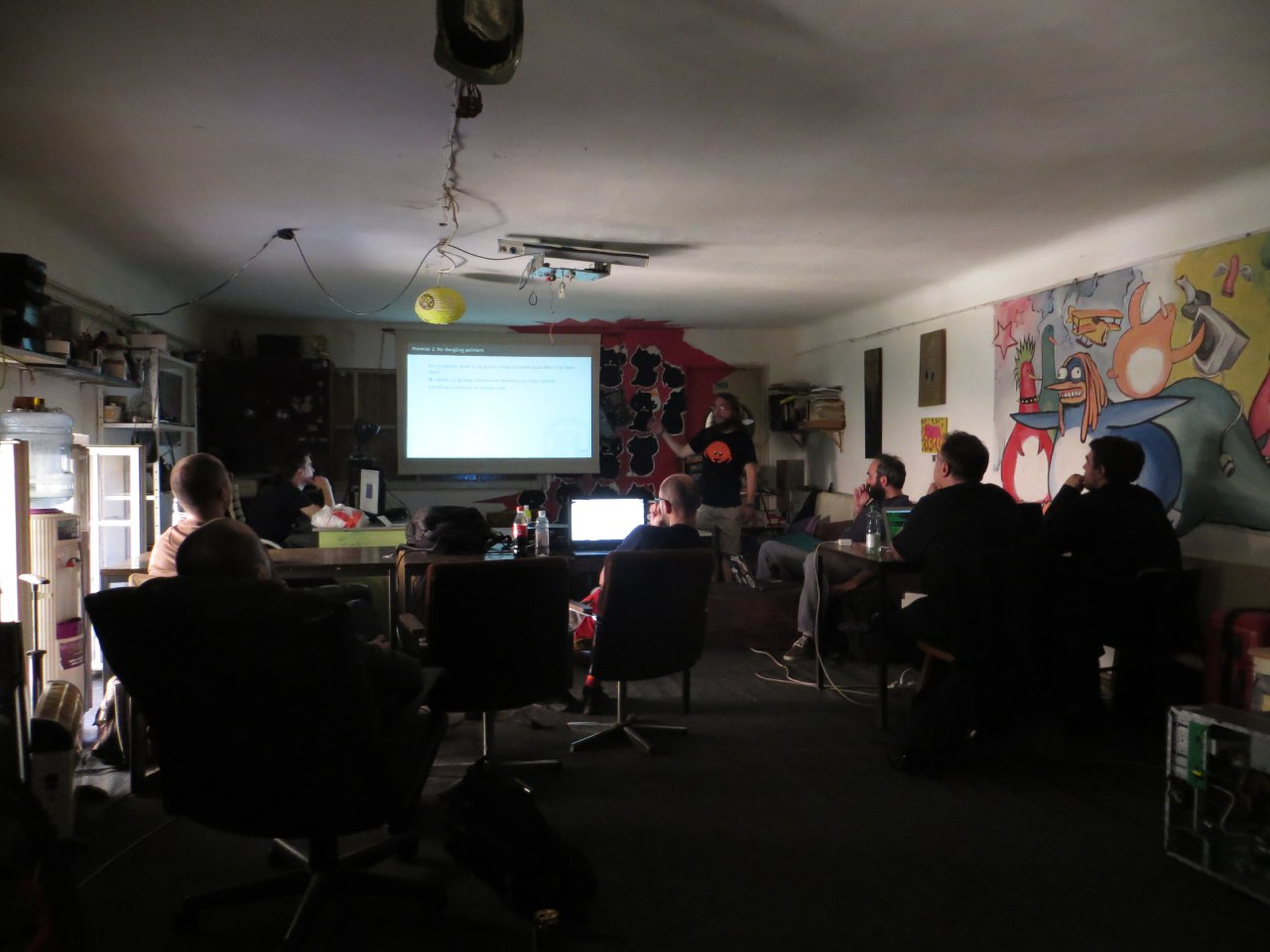 After the workshop we joined the party 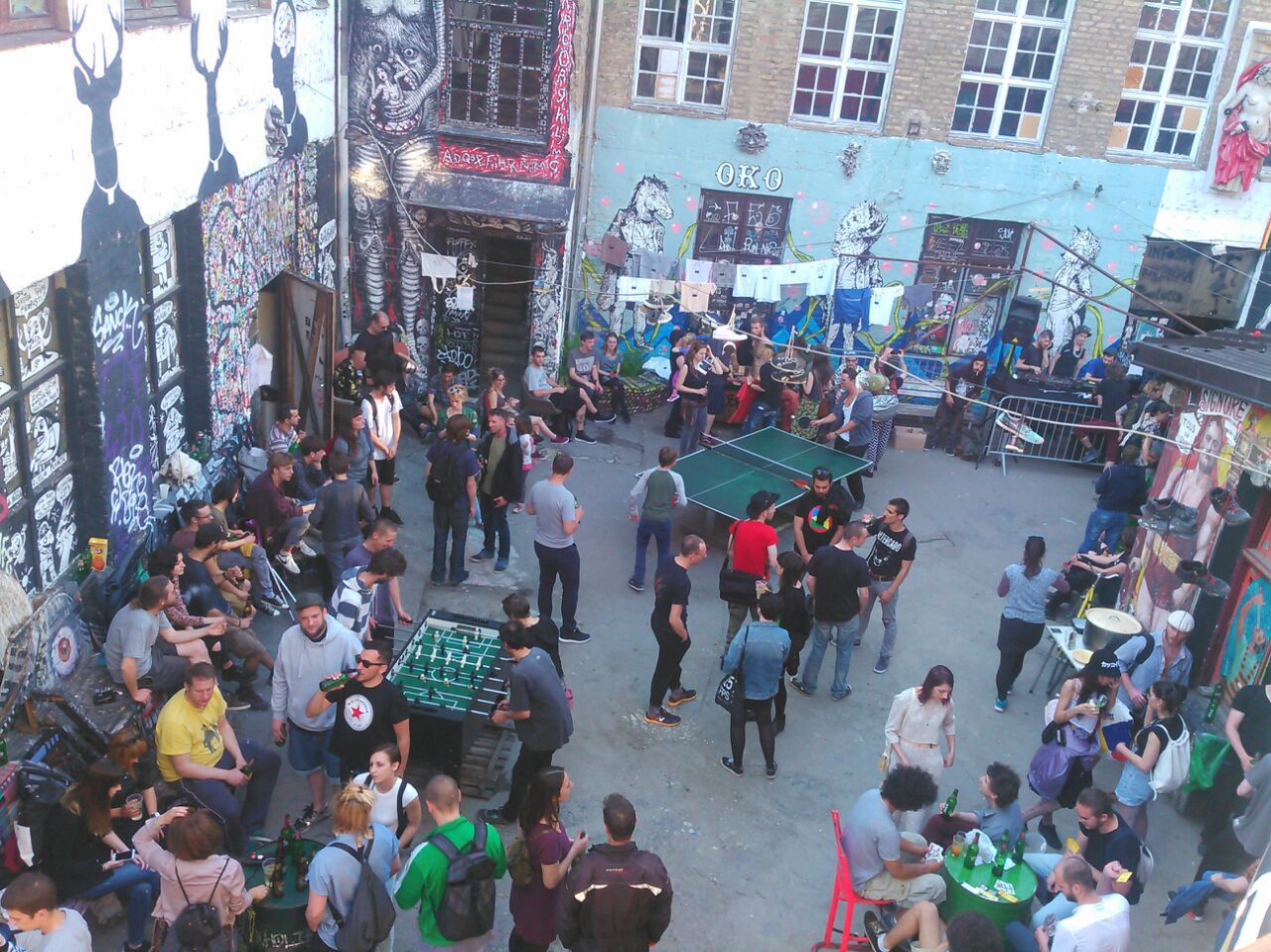 Vedran suggested that I also visit another hackerspace in Zagreb, namely RADIONA. One member of them offered to pick up by car at Medika and drive us to the space. 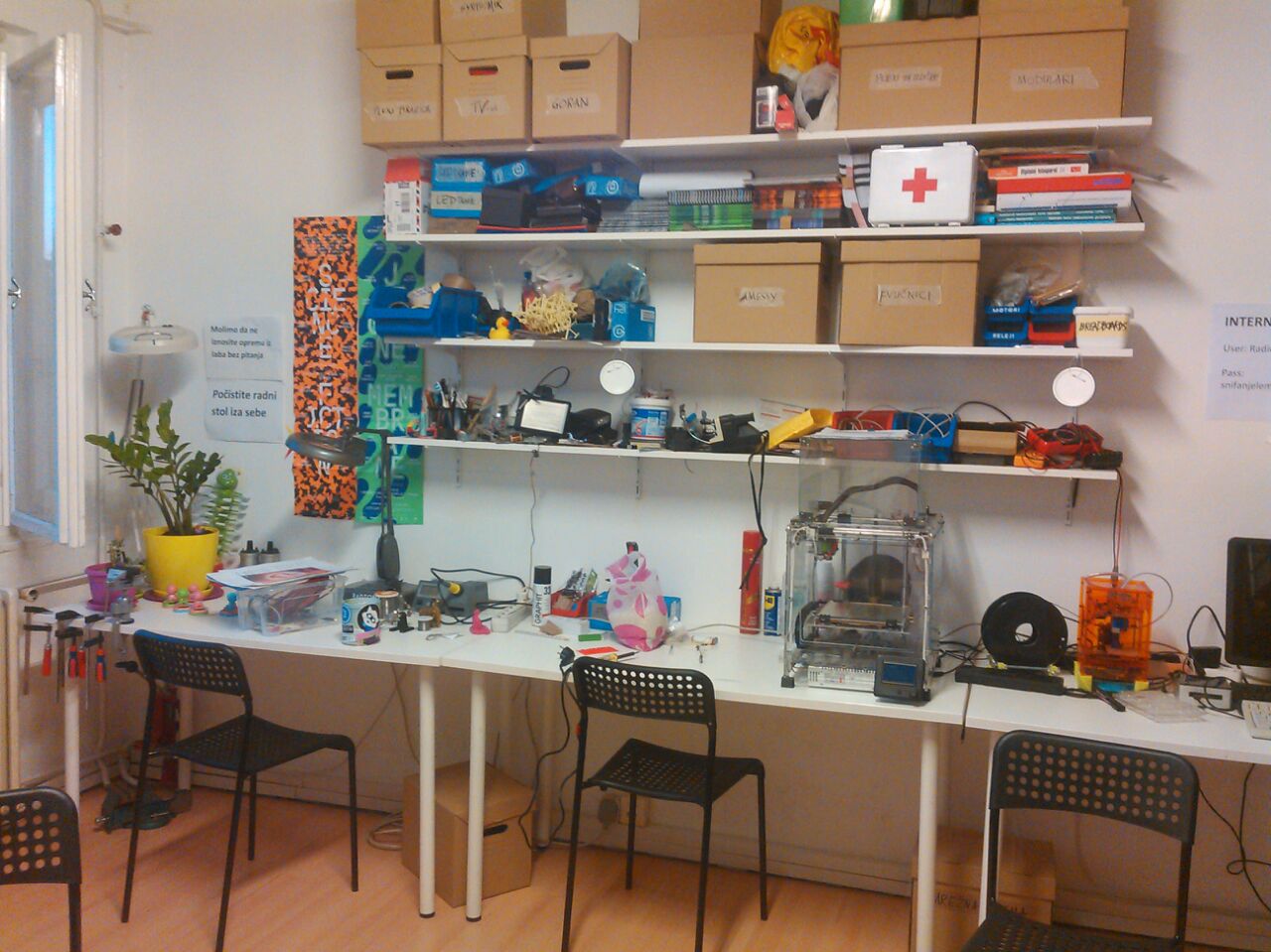 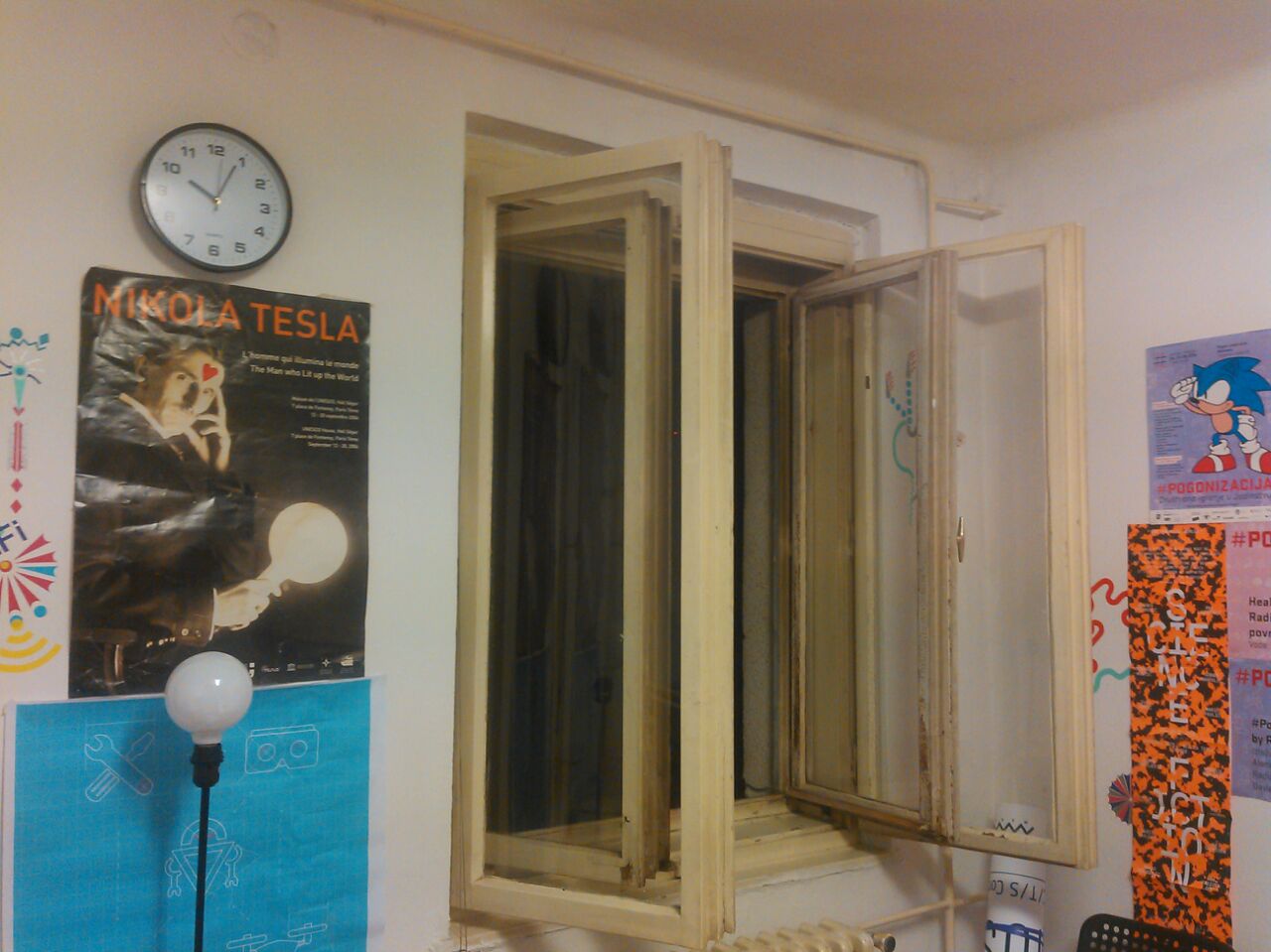 It is a rather small space, even smaller than coredump, but the community is very alive. One of the members built his own electric skateboard and we had lots of fun talking about the design of it and testing it. 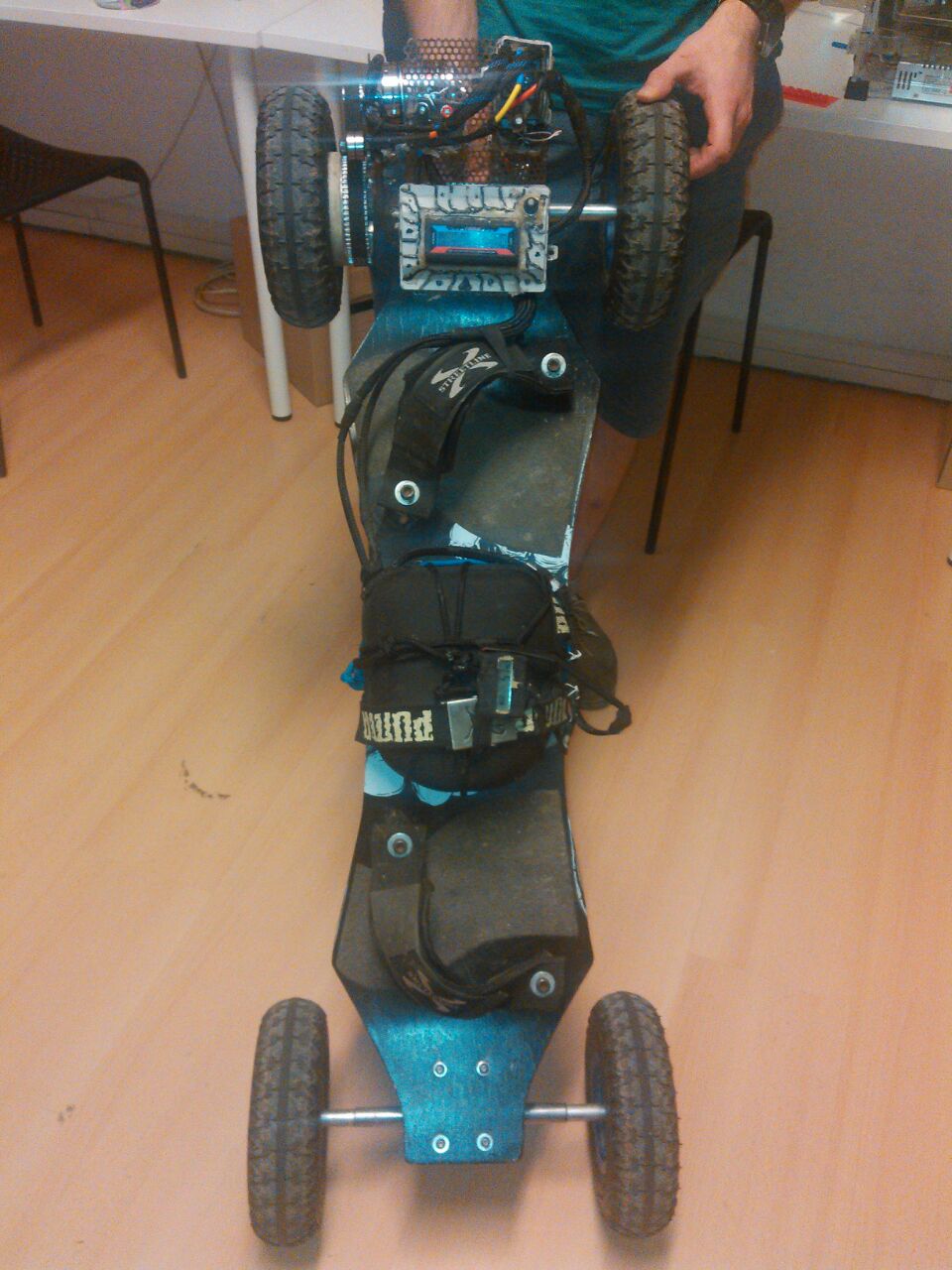 After our short visit, we returned back to Medika, enjoying the party for the rest of the evening.

The next day it was already time to leave. I met with Vedran to have some breakfast and we talked about the various projects they run. Medika itself hosts many artists and arts projects, amongst others

Vedran and Dina are especially involved in the glitch art community. They organize a festival called fu:bar and developed a gallery management software called pivilion.

The time I spent at hacklab01 / Medika was truly amazing! I've seen so many things and met so many interesting people! If you want to visit them as well you may apply for their hackn3t program, a hackers residency program. I basically means, they will try to cover for your travel costs if you visit them and present some project or idea or whatever.

But as much as I enjoyed my time in Zagreb, I was also looking forward to my next destination Ljubljana, Slovenia!